The 5 Stages of a Relationship You Need to Know

Modern relationships can be tricky. This is true for every age group, whether you’re a teenager in love or you’re over 50 in the blossom of a new romance. That’s why it’s important to think about the stages of a relationship. These different stages of love help you to understand where you are in a relationship, what the other person’s feeling and where you’re heading.

The Stages of a Relationship

With the advent of technology, it’s much easier to be in constant contact with our significant other. This regularly puts pressure on couples to be in each other’s pockets. So, how do you figure out what stage of a relationship you’re in when modern dating ensures you’re always talking? We’ve compiled the best relationship advice and psychological theories about the phases of a relationship so you can understand which stage you’re in and where you’re heading next.

1. The First Stage in a Relationship – The Spark Phase

On the spectrum of stages of a relationship, the spark phase is probably the most well documented. It’s when Harry Met Sally, it’s the template for all romantic films because it’s typically the most exciting stage. You’re exclusive to each other and you’re enjoying the first flourishes of a new romance.

Renowned neuroscientist Helen Fisher, Ph.D. and clinical professor Lucy Bown, PhD have studied the brain activity of people in love to truly understand the different steps in a relationship.

In Verywell Mind, Fisher said “In the early part of a relationship — the falling in love stage — the other person is the center of your life. You forgive everything in these early stages. The other person has faults and you see them but it doesn’t matter. Maybe they leave their dirty dishes in the sink, but they make you laugh at least daily, so it’s okay. Good things outweigh the negative here.”

Fisher and Brown’s study also showed a decrease in activity in the part of your brain that deals with the negative judgment of people. Meaning that you aren’t imagining it, all those little annoying habits at the start of a relationship really do seem cute and endearing!

Read More: Not sure when to kiss her during this spark phase? Check out our expert guide to that first kiss.

The honeymoon phase is the relationship stage that’s viewed as the cliched ‘best’ phase, but it can actually include some conflict. This stage is characterized as the time when, as a couple, you are now content to be lazily in love around each other. Unlike the spark phase, it’s likely that you’re staying in more than you’re going out and you prefer each other’s company rather than making effort with others. It’s all about cuddling on the sofa, bonding deeply over your favorite things and discovering even more things that you like about each other.

Intimacy in this stage is usually at an all-time high, with it sometimes bordering on public displays of affection which others can find uncomfortable. There’s a reason why couples in the honeymoon stage of a relationship can be portrayed as obnoxious or cringeworthy to others outside of the relationship. Even the wisest senior singles can still fall prey to the trappings of love!

This is also a time when couples could be placing each other under ‘secret tests’. In Knapp’s Rational Development Model which details the different stages of a relationship, the honeymoon phase is described as the ‘Intensifying Stage’. Tests can include being apart for an extended period of time, seeking out friends’ opinions, and testing if the other is jealous. This stage can be tumultuous and could result in the end of a relationship.

Try and be mindful of how you’re acting and remember communication is key. Even at this early stage, you should talk about how you’re feeling.

The partnership phase is the stage of a relationship that most people have experienced as a normal stable relationship. You’re living together, or you’re in a long-distance relationship, and you finally feel like you understand your partner’s best and worst points. There’s a comfortableness to your life that feels safe and certain, especially since those ‘secret tests’ from the honeymoon phase are over.

Over 50 singles will probably understand this relationship stage better than most. Which is why you’re probably aware that becoming too comfortable can be a bad thing. Letting fights sizzle rather than resolving them, or snapping and nagging at each other instead of saying how you feel are both to be avoided. This can go on for a long time before the couple realizes that they’re unhappy because usually, the good times outweigh the bad.

The partnership phase can be the make or break point for most relationships. Remember to talk to each other, have mutual respect and understand the other person’s point of view. Even though you’re partners, you’re still individuals, so focus on that when a conflict arises.

If you’re divorced, widowed, or have been in a long-term relationship, then this stage will be familiar to you. For singles over 50, this can also be a stage of a relationship that’s most challenging because of your past experiences when it comes to commitment. If you feel concerned about this stage then make sure you’re open and honest with your partner when it comes to those big decisions, such as moving in together, marriage, or integrating your lives more.

Romance is like a plant, you need to keep nourishing it to keep it alive. So, even though at this stage you find you have fights every now and then but generally everything is peaceful, you have to keep watering the plant! Surprise your partner with thoughtful gifts, plan some adventures together and remember to enjoy the little things. Couples who have survived crises together are stronger together than they are individually, so use your combined strength to create some memories.

5. The Final Stage of a Relationship – The Bonding Stage

Just because you’ve reached the final bonding step in the different stages of a relationship doesn’t mean your relationship is now boring! This stage is when you and your partner are harmoniously in sync. However, that doesn’t mean there are no fights. Instead, you have a better understanding and knowledge of your partners internal and external feelings. This allows you to grasp their point of view as well as learn and grow from the experience.

Fisher and Brown’s study of long-term romance describes this stage as “calm”. “When couples have been together for many years. It’s just very very calm. And it’s secure.”

On the other hand, Knapp’s Model takes a more introspective approach to this stage of intimacy.

Knapp states, “Once each individual feels confident, through their various intensification efforts, that mutual affection has been confirmed, the couple may begin to transition into the integration stage of their relationship. In addition to bonding, the integration stage makes up the maintenance stage of a relationship. During this stage, the couple is fused and elements of their respective social identities, such as friends, belongings, and living spaces, are now shared.”

To reach any of the stages of a relationship we’ve mentioned, you first have to find a potential partner who shares your values and goals. This is why SilverSingles is one the best online dating sites for singles over 50 looking for a new adventure and fresh romance. 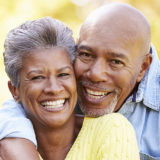 Online Dating Over 50 Dating: Find Your Next Partner with SilverSingles
SilverSingles » Magazine » Living » Relationships » The 5 Stages of a Relationship You Need to Know